BOOK 2 OF THE ST. FLEUR SERIES 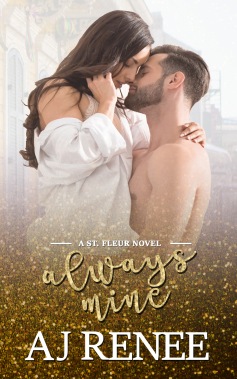 Don’t forget to add Always Mine to your TBR list on Goodreads!

Librarian Lindsey Roman’s life goes from quaint and quiet to dangerously confusing when she finds herself tangled up in a seductive love triangle, caught between her past and the present.

Her love life complicates when a mysterious stranger she couldn’t quite place turns out to be her childhood crush. Then it takes a violent turn when she learns there is a stalker watching her every move in the small town of St. Fleur.

Sexy-as-sin construction worker Marcos Arocho didn’t expect to see Lindsey after all these years. His best friend’s little sister is all grown up and awakening his uncontrollable desire for the first time in nearly a decade.

He knows getting involved with her is not an option, but it doesn’t stop him from being charmed by the woman who secretly stole his heart so long ago.

As her guard lowers, their innocent flirtation leads to something neither saw coming. When passion leads them to the truth, will it be a second chance at first love or the final nail in the coffin of their attraction? As she made it into the kitchen, she heard Marc enter the house. Lindsey found Sofia and Noah in about the same position, except this time they were completely unaware of her presence. She watched in embarrassment as Sofia’s hands slipped under Noah’s shirt. Lindsey cleared her throat, but it fell on deaf ears. Sofia’s moans filled the room, and her legs tightened around Noah’s trim waist.

“They didn’t hear you…” Marc whispered in her ear.

The feel of his breath on the shell of her ear and down her neck felt so good. Lindsey clamped her thighs together to squelch the desire that flooded her traitorous body. Marc placed a hand at her waist and stepped around her, making her gasp at the touch.

He gave her an arrogant, knowing smile and turned to their best friends. “Get a fucking room, guys!” “Tu casa es mi casa,” he said with his most charming smile as he took in her short, beautiful legs.

Bending forward, she gave him the best view in the house, and he nearly swallowed his tongue. Her head turned enticingly toward him, her dark brown hair falling to the other side as she rolled her eyes at him.

“Um, isn’t the saying supposed to be ‘Mi casa es tu casa’?” She snickered and straightened as she turned away.

Reaching forward before his mind could stop him, Marc gently grabbed her wrist and gave her a tug. She fell into his lap with an “oof,” and she stared at him in panic. Marc pulled her incredibly soft legs over his own, so she sat sideways. With the new position, she placed her hand on his shoulder for purchase.

“Marc?” Her breathy voice shook with confusion and anticipation.

Hearing his name roll off her lips made his blood rush straight to his groin. Her eyes widened and darkened with desire at the change.

“Si, mi cielo?” Marc’s gaze moved down to her lips. Heat flooded his body, his heart took off, and he became mesmerized by the way she pulled in her lower lip and bit down hard. A groan escaped him, and he pulled the tender flesh out of her mouth with his thumb. Marc rubbed the rosy, soft skin.

When Marc leaned forward, Lindsey asked, “What are you doing?”

Examining her face, he noticed the soft blush across her fair skin. Her light brown eyes had flecks of yellow and green, something no one would notice unless they were as close or as focused as he was. The idea of anyone else being this close to her made him crazy. A faint scar an inch long marred the delicate skin under her left eye. Most wouldn’t notice that either, but he’d been there the night she got it. His thumb swiped at it as the memory of her bumping into him as a kid while they played Ghosts in the Graveyard came to mind. Her glasses had slammed into her face, creating a gash that had luckily not required stitches.

Marc’s lips came within a breath of hers. He searched her eyes for any signs of distress and found none. His lips grazed hers at the same time a door closed in the hall.