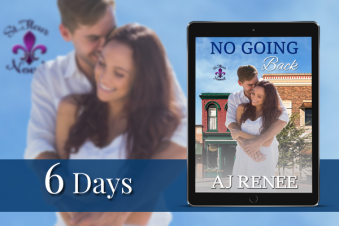 #ONECLICK #COUNTDOWN
||| NO GOING BACK by AJ Renee |||
A St. Fleur Novella
||| #PREORDER |||
Kindle: smarturl.it/NGBAmzn
Nook: smarturl.it/NGBBN
iBooks: smarturl.it/ngbitunes
Kobo: smarturl.it/NGBKobo
TBR: http://bit.ly/NoGoingBackTBR
||| #EXCERPT |||
“You’re staring,” she told him.
Rocco shrugged. “How are you?”
“I’m good.” She tilted her head. “What’s going on?”
“Why does anything have to be going on?” he asked, curious to see if she’d admonish him. When a smile tipped the corner of her mouth, Rocco smirked.
JJ lifted her glass and drank. Rocco watched the column of her neck as she swallowed and imagined kissing his way down all that fair skin. He shifted in his seat, placing his ankle on his knee to see if that would ease the pressure forming in his pants.
“Well, for one, you’ve never sat with me for a meal,” JJ said as she put the glass on the table.
Rocco nodded. “True, and you’ve never felt the need to drive by the garage ten times a day.”
A blush covered her cheeks and swept down her neck. The color only highlighted her beauty and made his mind consider other ways he could make her turn that red. He was a rat bastard. He shouldn’t have embarrassed her like that. “I’m sorry.”
She shrugged. “Don’t be. It’s true. I’ve been worried about you.” The words came out whisper soft and he almost missed them.
The waitress returned with his food, and he sat forward. “Why?”
“Why what?”
“Why are you worried about me?” Her concern touched him, and he had to stop himself from rubbing his chest. Rocco was the oldest child. He wasn’t accustomed to others worrying about him—ever.
JJ placed her fork down. “Rocco, there’s obviously something going on with you. If you need—”
“Ah,” he said, pushing down his disappointment. “That’s all this is about.”
They stared at each other a moment before she said, “Ye—no… no, it’s not.”
Rocco raised an eyebrow. “No?”
Before JJ could say anything, her phone on the table rang. She looked from the caller to Rocco and sighed. “Sorry,” she said before answering the call. “Jolie. —Hey, what’s going on? —Oh, okay. Sure, I can be there.” Her eyes darted toward Rocco and away.
Rocco took another bite of his burger and listened as the conversation went on for another minute.
“Sorry about that,” she told him after ending the call.
“Everything okay?”
JJ raised an eyebrow. “Why, Rocco, I might think you’re worried about me.”
“Would that be so bad?”
The teasing expression on her face softened. “No. That could be nice.”
“Oh yeah?” he asked, unable to stop his chest from puffing out some.
JJ laughed, and the sound was feminine and sexy. “Yeah.” She pushed her plate away and dropped some money on the table. “Well, I need to go.” JJ slid out from the booth. “That was my sister, and she needs me to come over.”
“Have dinner with me?” Rocco blurted.
“Yes,” she said at the same time he said, “I mean…”
“Yes?” Rocco asked.
“I’d love to have dinner with you.” JJ winked.
His cheeks pulled back tightly. “Great, how does Friday sound?”
JJ laughed. “Today is Friday.”