Author: AJ Renee
Genre: Contemporary Romance/Romantic Suspense
Release Date: May 8, 2019
Blurb
The mob. A mole. Murder.
In a matter of seconds, Charlotte Mae’s life
fell apart. Now her boyfriend’s lifeless eyes haunt her dreams, and she carries
the blame for her father’s death.
When she’s forced to return to work in NOLA,
it’s under the watchful eye of bodyguard and former Navy SEAL, Carter Fortier.
With the mob determined to tie up loose ends,
Carter must make dangerous alliances and depend on his brothers-in-arms to have
his back. But the danger Charlotte Mae poses to his heart is one complication
he doesn’t account for.
Can two damaged hearts find love while
fighting for their lives, or will the forces working to silence them succeed in
ending more than just their budding romance?
ADD TO GOODREADS 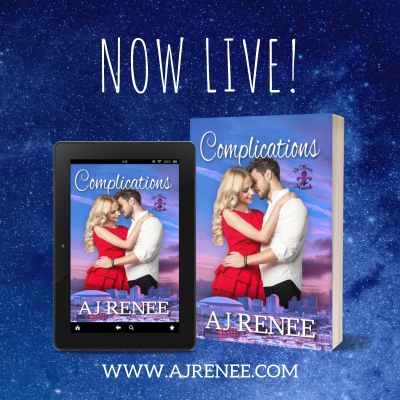 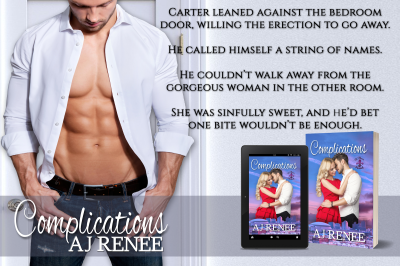 Excerpt
“Holy
shit,” Lindsey muttered.
“Charlie,”
Jaime Lynn whispered, and she turned to face her sister. “Well, ain’t that some
shit?” Jaime Lynn chuckled.
Charlotte
Mae cleared her throat. “What?”
Jaime Lynn
nodded toward Carter. “When did that happen?”
“When did
what happen?”
“You and
Carter,” Jaime Lynn said, directing a “don’t try to bullshit me” expression at
Charlotte Mae.
“There’s
nothing between Carter and me,” she said and didn’t miss the twinge she felt
under her breastbone at the words.
“Honey,
something is definitely going on
between you and Carter,” Sofia said softly.
“He’s just
doing his job.” Charlotte Mae swallowed thickly past the bitter words.
“That man
is not just doing his job,” Lindsey whispered.
Jaime Lynn
looked over Charlotte Mae’s shoulder. “He hasn’t stopped watching you since the
moment he came inside. And we won’t even mention the way he took care of you
just now.”
Charlotte
Mae shifted in her seat and clenched her teeth. “His job is to watch me. He’s trying to keep me safe because it’s his job.”
Jaime Lynn
grabbed Charlotte Mae’s hand from the bar top and cocked her head to the side.
She studied Charlotte Mae for a few moments then leaned in as close as she
could with the bar separating them. “You know it’s okay, right? It’s going to
happen eventually.”
“What are
you talking about?” Charlotte Mae asked, annoyed to be having this
conversation.
The women
on each side of her sighed.
“Chase
would want you to be happy,” Sofia whispered.
Charlotte
Mae stiffened. “Nothing is happening!” She glared at her sister. “Can we drop
it now, please?”
Jaime Lynn
sighed, and sympathy flashed in her eyes. “Okay, honey, we’ll drop it.”
She mouthed
a thank you and relaxed when Jaime Lynn turned the topic to Kayla, Jesse’s
daughter. Charlotte Mae glanced at the group of men chatting and noted Carter’s
brows pulled together. She offered him a small smile, and the crease on his
forehead vanished. She hoped their voices hadn’t carried in the empty bar.
Setting aside the worry, she returned her attention to her friends, happy to
have them around.
Charlotte
Mae enjoyed being with them and listening to the things she’d missed. Not that
she’d gone to St. Fleur often, but when she did, she loved spending time with
her sister and friends. They were good people.
She didn’t
know why reminding them she was only a job for Carter had upset her so much.
Nothing could come of their time together. He only saw her as a woman who’d
gotten herself in an awful predicament. Plus, allowing any emotions for the
sexy man to form felt like a betrayal to Chase. It wasn’t logical, she knew
that. Chase was gone, and she was alive. But… shouldn’t she be grieving? How
much time needed to pass before she “moved on”?
Would she
ever live in a world where she didn’t feel guilty? Why couldn’t she have met
Carter later? Each passing day included at least one fight between her mind and
heart. It was exhausting.

AJ Renee is
the author behind the St. Fleur series, Beauty Unmasked, Winter’s Surprise,
Surviving Paris, Finding Love at the Falls…, and Kylie: Crossing Lines. She’s
a military wife and mother to three young girls. She graduated from the
University of Central Florida with her Master of Science in Criminal Justice
and a Bachelor of Science in Psychology while working at the library.
She loves
to write steamy romance with suspense and a happily ever after. When she isn’t
writing or interacting with her readers, you can find her spending time with
her family or reading. AJ enjoys traveling, researching family history, and all
things New Orleans.
Author Links
NEWSLETTER